DETROIT — A $120,000 window film retrofit aimed at reducing energy costs and tenant complaints at Edison Plaza office building here is expected to yield a payback in just under three years.

Having applied reflective, low film to about 80,000 square feet of glass in December, Edison Plaza property management expects to lower the building’s annual electricity costs by about 4 percent, or $32,700. That reduction will come from a projected summer peak demand reduction of 93 kilowatts (kw) and an annual energy consumption reduction of 360,000 kilowatt hours (kwh), according to Jessica Toupin, a property manager with Hallwood Management.

The retrofit earned $24,080 in rebates from local utility Detroit Edison Co., lowering its payback to 2.9 years. The rebates were awarded under the utility’s Custom Equipment Incentive Program, according to Paul Cramer, program manager. The demandside management program is open to the utility’s industrial, commercial, and institutional customers and pays $200 per kw removed from summer peak and 1.5 cents per kwh conserved.

The glazing treatment selected for the retrofit was Llumar Series E silver film by C P Films, Martinsville, Va. The film has a shading coefficient of .24, reduces solar gain by 79 percent, and cuts radiant heat loss by 69 percent, according to William F. Kish, President & Owner of installing contractor Solar Reflective Films, Farmington Hills, Mich. A scratch-resistant coating for easy maintainance and 7 year manufacturers warranty are standard with the E1220 film, he noted.

By using film to reduce solar gain, building managers will be able to throttle back the building’s two 820 chillers, saving on both energy consumption and demand, Toupin told EUN. With almost an entire cooling season of bills in hand, she reported the retrofit is meeting savings estimates.

Chiller load has dropped from 100 to roughly 80 percent, she continued.
“We used to have to turn on our chillers at three or four in the morn to cool the building, and now we can run them at 6:00 a.m. and they don’t work as hard,” Toupin added.

She said the project might exceed projections through additional cooling season energy savings and lower winter steam heating costs. However, as of EUN press time. Toupin was still gathering utility bill data and couldn’t quantify additional savings, but she estimated that the retrofit would reduce annual energy costs significantly.

The project’s effect on tenant comfort was immediate, Toupin noted, saying it has virtually eliminated temperature complaints.
“It was a constant cycle of heating the south side and freezing the north,” she related. “In the morning we had at least 10 calls from southside tenants complaining that they were too hot and in the afternoon, there would be at least four calls from north side saying they were too cold.”

In April, when the chillers are sometimes down for repairs, occupants would also frequently say they were uncomfortable, Toupin continued.

The film has created a more even distribution of air conditioning load, making the transition from heating to cooling seasons more comfortable, she said. Toupin called window film a “quick hit” measure, but told EUN that Detroit Edison incentives were a critical factor in the decision to have the entire building treated. Originally the end user was presented with two prospective paybacks based on film application to either two or four sides of the building. Applying film to only the west and south sides would have earned a payback in 6.5 years and a rebate of about $6,500. Hallwood opted to retrofit all four sides because of the more favorable return.

While price and product quality were important, the property manager also assigned a high value to proper installation. Toupin told EUN she shopped around, asked for references, and visited a number of buildings to gauge prospective installers’ craftsmanship.

After narrowing the field of film distributors to two candidates, she had each distributor install test panels on various parts of the 24 floor building. The panels made a dramatic difference, she recalled. “You could feel the difference on your skin when you stepped in front of one of the test panels and stepped back into an untreated area,” Toupin notes.

In the end, the quality of two candidate’s workmanship was equal but the Llumar film cost about half as much as the other product, she said.

While the building appearance is expected to benefit from the retrofit, Toupin ranked enhancing aesthetic appeal third in importance after energy savings and occupant comfort. Because the mirrored film was applied over existing bronze-tinted glazing, Toupin was concerned about mixing the two shades. However, the blend resulted in a golden hue that sets the building apart from others in the area, she observed.

Toupin told EUN that tenants near southfacing windows used to draw their blinds frequently to cut heat gain and ensure privacy. This strategy often created an unappealing non-uniform appearance from the street, she said.

“Nobody wants the sun beating down on them in their offices, and even with the brown tint, you could look right into the building. The blinds just made the building look bad, and that’s something that is important to prospective new tenants and lease renewals,” Toupin concluded.
Courtaulds Performance Films, Inc. Martinsville, VA 24115 (703) 627-3000 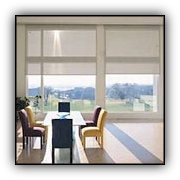